You are here: Home » Lifestyle » What are the Best New Ways to Play Poker? 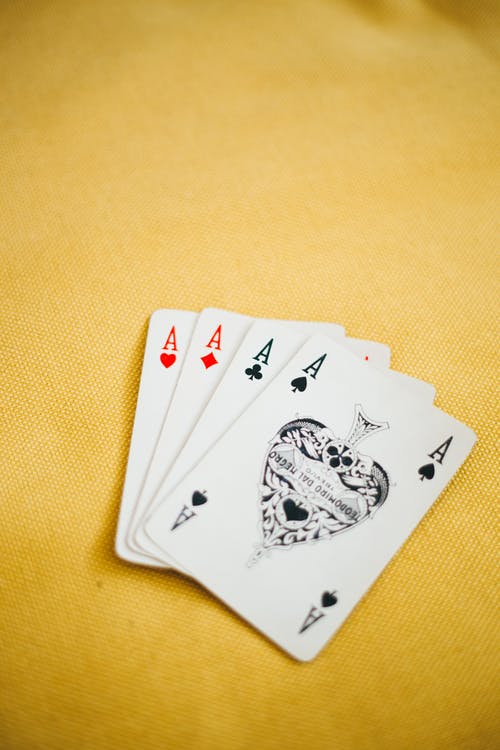 Caption: No matter what variant of poker you are playing, four aces is a pretty unbeatable hand.

One of the great things about poker is the fact that there are so many different ways to play. Most versions of the game use the same values for the hands, so it is easy for a player of one strain to pick up another one. For some players, poker is a lifestyle choice and the more options they have, the better. When online poker first became popular in the 2000s during the poker boom, Texas Hold’em was the most popular variant. It is still the go-to form of poker to this day, but a lot of sites are now mixing up their offerings so players can try new things. As well as being fun, playing a wide range of games can improve overall poker skill.

What Different Poker Variants are There?

Caption: Omaha is one of the most complicated forms of poker.

Texas Hold’em is by far the best-known variant of poker, and it became a global sensation just after the turn of the century. Hold’em is a community strain of poker, in which each player receives two hole cards before five shared cards are dealt in the center of the table. Each player has to make the best possible hand with five of the seven cards at his or her disposal.

This version of the game took off because of its simplicity, and the fact that players could have a good idea about what their opponents might be holding by simply looking at the cards in the middle. For this reason, it translated well to internet sites.

When poker sites became more abundant, operators started to offer different variants of poker as a way to attract players. Omaha follows a similar set of rules to Texas Hold’em, so it quickly became the second most popular format. In this strain, each player receives four hole cards and there are five community cards. The main difference is that players have to make a hand using two of their hole cards and three from the community set. This means it can often take some time to work out what draws you are on.

Some more traditional forms of poker are beginning to emerge online as well. Options like stud poker were popular in the pre-internet days but faded away during the poker boom. In this format there are no community cards, and each player receives between five and seven cards over the course of the hand. These come down in streets with rounds of betting after each new card is dealt. Some cards are dealt face up as well, so the other players at the table can get an idea of what their opponents are holding. If this wasn’t the case it would be almost impossible to play it as a game of skill in an online setting.

What Are the Newest Forms of Poker?

Over the last five years, a vast number of online poker sites have begun offering their content to mobile players. The mobile gaming market was worth $49 billion in 2019 and it is still growing. Poker operators have realized that they can tap into a much wider player base by getting onto the portable platform. The thing is, though, that a lot of mobile players are seeking a different sort of playing experience. Some of the most successful games on the platform have been basic puzzle games that can be played in short bursts.

For this reason, poker had to adapt to the smaller screen. This led developers to think of innovative ways of playing the card game which would appeal to on-the-go players. 888poker has created two of the leading options in this regard. Snap poker is a fast-fold variant of the game which instantly deals players into a new hand whenever they fold. This means that they don’t have long waiting times where they have to watch their opponents play out a hand before the next cards are dealt.

The other exciting new way of playing Texas Hold’em from 888poker is Blast poker. This is another game that can be played in a short amount of time. It involves three players in a sit & go tournament format. It plays out like a normal tournament, with the only difference being that players don’t have as much time to make their decisions. In addition to this, there is a countdown in the middle of the screen. When this reaches zero, each player is forced to go all-in on every hand until one player is left with all the chips. That person is then declared the winner. It has random prizes, meaning that players have an opportunity to win up to 10,000 times their stake.

What Are the Common Trends in These New Variants?

When poker moved to an online setting, a lot of elements of the game changed. It became faster paced, and players’ tactics had to be altered when they couldn’t actually see their opponents. It is clear that now poker has moved to mobile, the game has evolved again. There are gaping differences between live, desktop, and mobile versions of poker.

The common trends in the mobile market will be quick fire ways of playing like the two variants mentioned above. Players will log on and play in short bursts when they have a break at work or are commuting on the train. Developers have seen the need for these exciting and addictive ways of playing poker, and there are likely to be more innovations in the years ahead.

There are now so many different ways to play poker, that there is something to suit any player’s tastes. If you prefer to take your time in a tournament, stick with the more traditional forms. But if you are after five minutes of sheer adrenaline pumping action, try out the new mobile offerings.